“Some people don’t know how to think straight,” he said to my client. Normally, Carmella would have simply asked what he meant, but nothing about this relationship was normal. Carmella is in a relationship with a verbally abusive partner. Verbal abuse is subtle and pervasive. It is especially prevalent in relationships when the wider network of support is reduced, like during a pandemic. What is verbal abuse? How do you know when you are being verbally abused? How can you react to deflect verbal abuse?

Verbal abuse is subtle and pervasive. There is obvious abuse, and then there are more subtle forms of it. Carmella’s partner is a practitioner of the more subtle forms, where you hang a sentence out and see what kind of reaction you get. Carmella knew that the first sentence, though stated in the third person “Some people” was really about her. She tried to figure out a way to defend herself. A way to deflect the remark without actually getting sucked into the trenches. After a few moments of silence, she looked at him and replied “That’s not true, I’m think clearly”.

This is the conundrum of the recipient of this kind of abuse; if they don’t answer than they receive the implied judgement unconsciously. Reacting in anger leads to even more abuse. Even if they choose to respond with clarity as Carmella did, it triggers a torrent of rage and abuse. In this case, Carmella’s partner accused her of wanting to start an argument even though he was the one yelling at her. 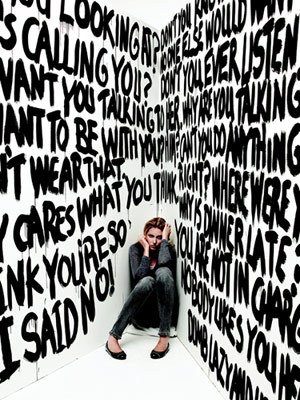 Responding to the abuser opens the floodgates. The abuser will now rain every shortcoming they can think of on the victim, mixing truth with lies and making them feel smaller and smaller. In this case, after blaming Carmella for everything wrong in his life from work, to teh kids behaviour in school, he finished where he started. “If you thought clearly, we wouldn’t be in this mess right now. That’s the whole problem!” and slammed the door on his way out.

As  you can imagine, Carmella reran this conversation in her mind hundreds of times throughyout the day. The poisen left byt he emotional abuser lingers on and on. She vascillated between where did she go wrong to maybe he was right? She wondered what was wrong with her that no matter what she did or said, she kept having this experience with the father of her children. That’s when she called for help.

Carmella began to separate her reactions from the trigger. She stopped reacting when her husband baited her. She realized she did not have to assume his remarks were about her (even if they were). That there was not necessarily a connection between his thoughts and words, and that he probably would not listen to reason. These are just the first steps. Eventually, Carmella will have to deal with how to raise children with this man in their lives.

If your experiencing verbal abuse, please remember that you can’t change the abuser. You are not responsible for their remarks, their thoughts, or their actions. Under no circumstances take what they say personally, they live to bait and hook you. The first step is to separate yourself emotionally from the abuser. To remove yourself as the victim, emotionally and perhaps physically. Learn more about abuse and begin the process of removing yourself from the cycel of abuse.

Copyright Greenturtlelab. All rights reserved.
We use cookies on our website to give you the most relevant experience by remembering your preferences and repeat visits. By clicking “Accept All”, you consent to the use of ALL the cookies. However, you may visit "Cookie Settings" to provide a controlled consent.
Cookie SettingsAccept All
Manage consent